Shipwrecks around The Great Orme Llandudno 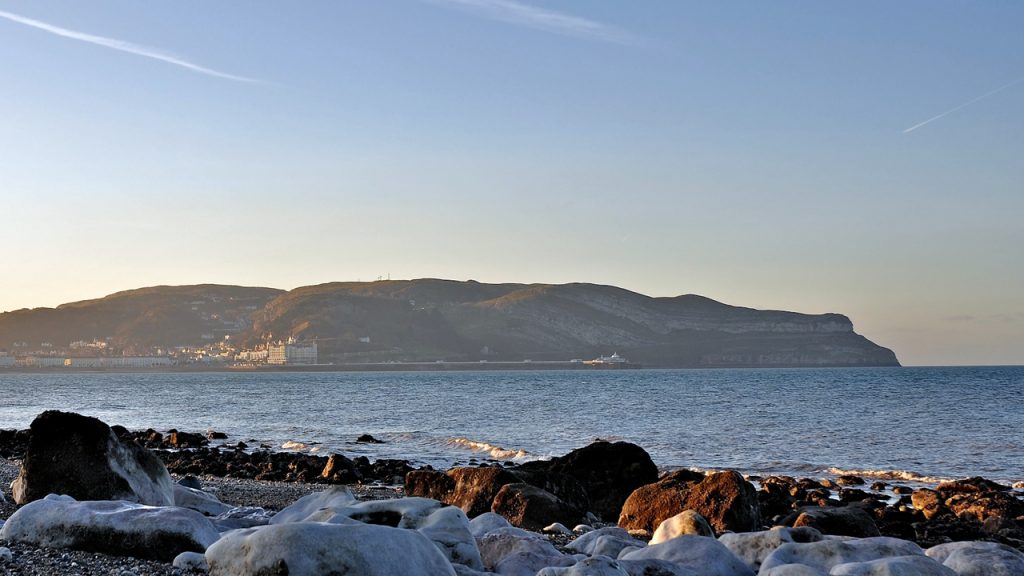 Throughout the ages, seafarers have looked upon the Great Orme as a serious navigational hazard. Many vessels have come to grief on its wave lashed cliffs. The sight of Llandudno’s Mountain looming out of the mist has struck fear in the hearts of countless mariners. The Norsemen likened it to a serpent and the name Heva Horma, which they bestowed upon, it became, in the fullness of time, today’s Orme.

An incalculable number of vessels have perished within sight of the Orme, their very existence totally forgotten. Nevertheless, many shipwrecks are still remembered and their stories told and retold to countless generations of Llandudno people.

Probably one of the best known wrecks is that of the brig Hornby which perished on New Year’s Day 1824. To this day, the site of the disaster is known as Hornby Cave, and the surrounding cliffs, as Hornby Crags. The vessel was bound from Liverpool for South America, and came to grief during a northwesterly gale whilst trying to round the Great Orme’s Head. Only one man, John Williams, survived the disaster. He was flung from the bowspirit onto the land, and managed to scramble up the cliffs to safety. In so doing, he exchanged the hazards of seafaring for those of mining, and spent the rest of his working life as a Llandudno copper miner.

A short distance to the west of Hornby cave are to be found Cerrig Uffern, Hell’s Stones. Huge rocks dislodged from the boulder clay cliffs are piled up in a frightening, and frequently, wave lashed conglomeration.

On Shrove Tuesday 1847 Cerrig Uffern claimed the barque, Jane Tudor, on its maiden voyage from Bath, Maine, bound for Liverpool.

A contemporary account of the incident describes how the vast majority of Llandudno’s inhabitants forsook the making of pancakes, and sped to the far end of Y Cil, (an area better known today as the Gunsite) to see this majestic new vessel lying over a massive rock, split almost in two. They marvelled at the ingenuity of the crew who had felled the foremast and used it as a bridge to reach the safety of the shore. However the ship was not lost. It was purchased, ‘in situ’, by Mr T. Jones, Timber merchant of Conwy, refloated, repaired, and employed for many years plying the Atlantic carrying many of the timbers used to build the Victorian Llandudno.

It is impossible to calculate the positions and numbers of the many wrecks lying off the Orme, but occasionally the shifting sands of the beach reveal tantalizing glimpses of past tragedies. Work on the recent controversial sea defence scheme at the West Shore, appeared to alter the level of the beach between the Gogarth Abbey Hotel and the Bishop’s Palace. The skeletal remains of an unidentified wooden ship surfaced in the sand. It measured forty five feet in length, with a beam of fifteen feet. It remained visible at low water for many months, and then it disappeared beneath another covering of sand. No doubt it will reappear sometime. Perhaps it will be identified. Perhaps not!

This area was the scene of a bizarre tragedy, long remembered in the folk memory of the area. During the latter part of the nineteenth century a boat from Conwy capsized near Penmaenbach, drowning the eight members of its crew. One of them William Evans, lived in a small cottage near the present site of the Gogarth Abbey Hotel. The following morning, his elder brother, Thomas, saw a boat being driven ashore by the wind. He went to investigate, and near the boat found the body of his brother William. This was the only body to be recovered and that within a stone’s throw of his home.

Many grim reminders of sea tragedies are to be found on tombstone inscriptions. At St Tudno’s a large flat stone records the death of Alice Tarrey who died in the wreck of the Rothesay Castle, a paddle steamer on a pleasure trip from Liverpool to Beaumaris, on the 17th August 1831. The ill fated and poorly equipped vessel ran aground on the Dutchman’s Bank. Of the 150 passengers on board only twenty nine survived the disaster.

In St George’s church yard a simple slate marker records the death by drowning of John Thomas, the Captain of the Cossack, on the 11th November 1845.

Occasionally there are happy endings to stories of accidents at sea. An oft repeated, though never substantiated, story concerns a small unidentified freighter, “just after the war”, which sailed a little too close inshore when approaching the lighthouse from the east. It ran onto Austen’s rock and perched there. As it was a glorious June day the crew admired the breath- taking scenery and drank tea until the flood tide refloated the ship and they sailed off into the sunset. Or so the local boatmen would have us believe!