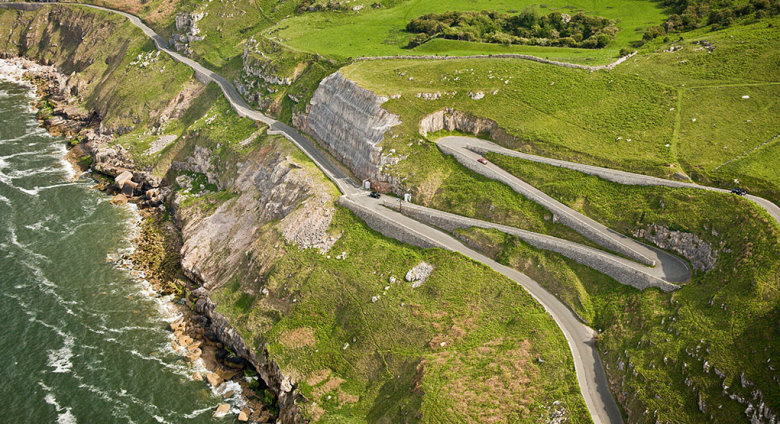 The Great Orme is a place of infinite mystery and the cause of much speculation amongst historians and archaeologists who come to study the area. Even those who know the old rock well, are intrigued by her shadowy beginnings and long to discover her ancient secrets.

It is said that the name ‘Orme’ is derived from an old Norse word for Worm or Sea Serpent and on a misty day it is easy to see why. The huge headland is composed of Carboniferous limestone, which began forming about 300 million years ago, on a tropical sea bed. Fossil remains of creatures that lived during this period are to be found everywhere, revealing the skeletons of primitive Fishes, Sponges, Corals, Molluscs and other invertebrates.

During the Tertiary period, the British Isles was subject to some of the most violent and dramatic volcanic activity, which gave rise to many mountain ranges. The Orme was sheltered to some degree by the rocks of Snowdonia but slight warping and folding did occur, causing layers of limestone to fracture and produce a fault.

Dinosaurs dominated the world for over 100 million years, finally becoming extinct about 65 million years ago. They were replaced by the more adaptable warm blooded animals, which could withstand the much colder climate.

During the Palaeolithic era, Old Stone Age man would almost certainly have shared the Orme with Mammoth, Lion, Hyaena and Woolly Rhinoceros, but archaeologists have not yet established when Homo sapiens first arrived on the headland.

If the camera had been invented 10 thousand years ago, as the last Ice-Age ended, the Great Orme would have created a dismal and depressing picture. After many thousands of years locked in the grip of a vast ice sheet, the great glaciers slowly retreated and the headland emerged as a barren and near lifeless landscape.

The lime rich soil was a greyish white, having no humus, while in many places the ice had scraped bare the rock leaving no trace of soil or life of any sort.

Yet, out of this wilderness came a strange life form, which slowly encrusted the hard rock surfaces and began the gradual process of colonization. Lichen, a curious plant association between Fungus and Alga, blew in on the wind and brought obvious life and splashes of bright colour to a seemingly dead stone.

Despite the extreme cold and bitter glacial winds, certain plants survived the ice-sheets by growing into shapes which protected them from drying effects, and from the warmer south came many animals to colonise this new terrain.

As the climate became more temperate, the glaciers melted, causing the seas to rise. During the warm ‘Atlantic’ period nearly 6000 years ago, sea levels rose a further six feet, drowning forests and flooding the land. The Great Orme became a virtual island.

Stone Age man probably came back to the Great Orme towards the end o the last Ice Age, although some believe he never left. These Britons were a hardy race of people, constantly on the edge of survival and braving the cruelest of winters, sheltered in caves around the headland.

Since then, countless generations have lived in the shadow of the huge limestone rock, some reliant upon her for survival, others intrigued by her many facets, all with the certain knowledge that the Great Orme will be here long after we have disappeared forever.

Much evidence of ancient settlements is to be found on the Great Orme. The area constitutes a vast, barely tapped, potential for archaeological research. With the exception of the ongoing operation at the Bronze Age mine site, very little investigative work has been undertaken in recent years.

The earliest site is that of the Great Orme Cromlech, Liety’r Filiast, a Neolithic burial chamber. It is to be found at the end of Cromlech Road. An interpretative board gives an account of the monument.

Traces of round huts are to be found at Bryniau Poethion, Hafnant and the halfway car park on the Marine Drive. At Pen y Dinas, hidden in the dense undergrowth are an indeterminate number of stone circles, and the defensive slopes of an ancient British hill fort. Legend suggests that the fortifications were eventually overrun by the Romans.

Almost hidden in the heathland, on the northern side of the Park wall is an avenue of stones, Hwylfa’r Ceirw, the Deer Walk, and a large oblong enclosure, Llety Fadog, Madog’s Residence. They are said to belong to post Roman and medieval times.

There are also very many, as yet unexplained, mounds, hollows, bumps and stones which bear witness to man’s long tenancy of Llandudno’s Mountain.